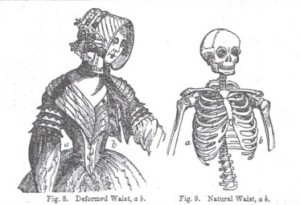 Courtesy of the Cambridge University Library

Carolyn Day, scholar of British history, medicine and disease, will speak Tuesday, Oct. 29 at 7 p.m. in the theater of Upcountry History Museum–Furman University.

Her talk is open to the public.  Admission is $5 for adults, $2.50 for students, and museum members are admitted free. As seating is limited, reservations are suggested.

During the early 19th century there was a chasm between the gruesome biological realities of tuberculosis and the comparatively positive representations of the illness by those who were afflicted. At the time, there was a tubercular moment in which cultural ideas about beauty became increasingly intertwined with the disease process which allowed the ravages of the illness to be presented in an aesthetically pleasing light.

Beauty was believed to be one of the hallmarks of the disease, as its effects were visible in the complexion, eyes, and even the smile. There was a dynamic interaction between fashion and disease, giving rise to “tubercular chic” in Britain during the first half of the 19th century. As a result, tuberculosis was rationalized as an affliction to be emulated both in beauty ideals and dress.