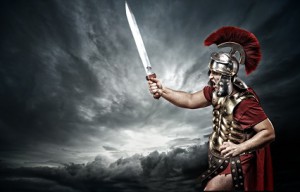 Jonathan Zarecki, professor of Classics at the University of North Carolina at Greensboro, will speak about the life of a Roman soldier Thursday, October 24 at 5:30 p.m. on the Furman University campus.

Zarecki’s talk, “The Real Life of a Roman Soldier: All Work and No Play Makes Gaius an Invincible Killing Machine,” will take place in Patrick Lecture Hall of the Townes Science Center. It is free and open to the public.

The talk is presented by the Furman Department of Classics and is part of Furman’s Cultural Life Program.

Wearing a full suit of authentic Roman armor, Zarecki will speak about the everyday life of Roman soldiers in ancient Rome. He also redresses some of the misinformation in popular TV versions of Roman war. Zarecki pushes beyond the “Great Man” perspective that still dominates ancient history where the army commander is the sole focus.

Following his lecture, there will be opportunity for photos with Zarecki, arrayed in his suit of armor.

Zarecki’s research focuses on the history and literature of the Late Republic, specifically the breakdown of the Roman constitution and the transition from republic to empire. His primary interest lies in Cicero’s writings, with particular focus on the letters and philosophical works.

He is author of Cicero’s Ideal Statesman in Theory and Practice (2013, Bristol Classical Press), and is working on a comprehensive history of the Roman lictors. His other research interests include Latin historiography, Horatian lyric poetry, and ancient warfare. Zarecki holds an undergraduate degree from Colby College and advanced degrees from University of Florida.

For more information, contact Amy Cockman in Furman’s Department of Classics, 864-294-2302, or amy.cockman@furman.edu.