The health care debate at Furman 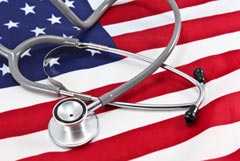 The South Carolina General Assembly has gone home for the year, but the fight over Medicaid expansion—a major building block of the federal Affordable Care Act and one of the most contested issues of the legislative session—is far from finished. On July 24, Thornton Kirby, president of the South Carolina Hospital Association, and Tony Keck, director of the state’s Medicaid agency, debated the topic at Furman, which is hosting a four-part health care lecture series this summer. The Charleston Post and Courier reported on the discussion.