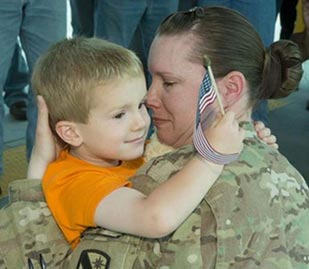 Army Major Nicole Bell is reunited with her 3-year-old son Hayden Bell at GSP as she returned back to the upstate from a five-month deployment in Afghanistan. / PATRICK COLLARD/Staff

Major Nicole Kuhne Bell of the U.S. Army has been in Afghanistan for the past seven months, but her deployment ended Friday and it was a grand surprise for her son, 3-year-old Hayden. Bell, who graduated from Furman in 2003 with a degree in political science, completed her third tour of duty overseas. She joined the Army as a member of Furman’s ROTC program in 2000, and met her husband, Steven, during her first tour in Iraq. The Greenville News wrote about Bell’s return home.