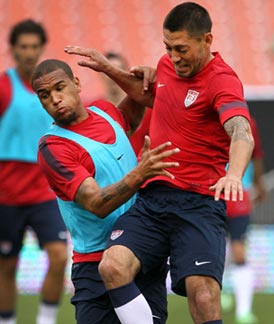 Clint Dempsey (right) played at Furman in the early 2000s.

U.S. soccer star Clint Dempsey never has been afraid to test the limits of his talents or Texas-sized ambitions. The former Furman soccer star wasn’t satisfied with winning MLS Rookie-of-the-Year honors or reaching the English Premier League. It’s that attitude and approach, along with the ability to deliver big goals, that helped persuade U.S. coach Jurgen Klinsmann to give Dempsey the captain’s arm band for the past two World Cup qualifiers. The Cleveland Plain Dealer profiled Dempsey on the eve of the U.S. national team’s international exhibition against Belgium.