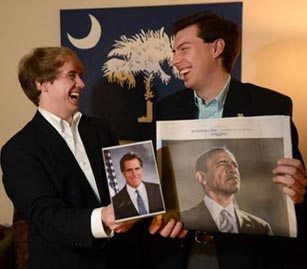 When Furman students Ben Saul and Thomas Hydrick left the campus Saturday night as graduates of the university, they left behind a greater legacy than student leadership and good grades. Even though Hydrick served as chairman of the College Republicans and Saul as president of the College Democrats, their political differences couldn’t keep them from being roommates and best friends. What they left behind was a wonderful model for cooperation and civil discourse.

Saul, a political science major, was named a 2012 Truman Scholar, one of the nation’s highest academic honors given to students who have excelled academically and are committed to careers in public service. Hydrick, who majored in history and political science, finished his Furman career with a perfect 4.0 grade point average and was one of six students awarded the Scholarship Cup at graduation.