Graduating senior Jack Farnsworth, a mathematics major from Athens, Ga., will be the student speaker at commencement.

Furman will award approximately 590 undergraduate and graduate degrees during the ceremony, which will be broadcast live via streaming video on the Furman website (www.furman.edu).  The university will also award Sister Peggy an honorary Doctor of Humanities degree. 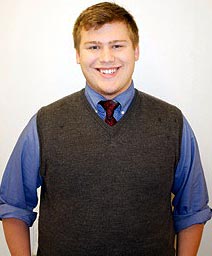 Farnsworth, who completed his hours in December, has been teaching fifth grade math this spring at Veritas Classical School in Richmond, Va.  He will teach geometry and trigonometry in the fall.  While at Furman, he worked as a chaplain at prisons and hospitals in and around Greenville through the Exploration of Vocational Ministry program.  He also played on the rugby team for four years, and spent two summers doing research in mathematics.

Sister Peggy, a nun with the Sisters of Charity, has been living and working in El Salvador since 1987. She went there to accompany a community returning from a U.N. refugee camp in Honduras during the nation’s civil war.  She ended up staying for the remainder of the war and has decided to devote the rest of her life to helping that community.  Her efforts include the founding of Centro Arte Para la Paz, a center designed to promote psychological and emotional healing through the arts.

Before going to El Salvador, Sister Peggy earned a Ph.D. degree in theology from New York University and taught religion and theology classes for nearly 20 years at Iona and Barry colleges.  She also teaches at the University of Central America in El Salvador.