Have teaching award, will travel 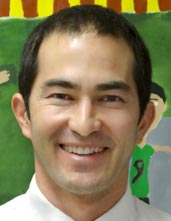 A trip to Norway and Finland is in Furman grad Steve Ahn’s future. A biology and earth science teacher at Abingdon (Va.) High School, Ahn received the 2013 McGlothlin Award for Teaching at the secondary level. The award includes a $25,000 prize, $10,000 of which must be used on an international trip.

“The idea is to use it to bring the world back to your classroom,” said Thomas D. McGlothlin, president of The McGlothlin Foundation. “We award the best teachers out there and keep them in the classroom.”

Ahn, who graduated from Furman in 1995 with a degree in biology, has taught at Abingdon High for four years and has been a teacher for 16.  He was an All-Southern Conference goalie for the men’s soccer team while attending Furman.

Read the article at TriCities.com