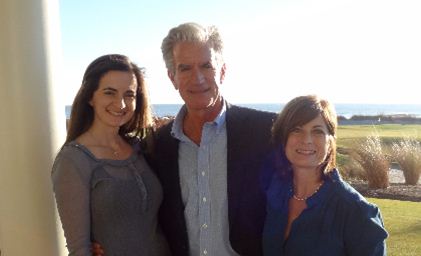 Jim and Lynda Panaretos with Alexandra '15

When it comes to helping Furman raise funds to support the many programs, departments, and activities that create a top liberal arts education, parents play a vital role.

Now, Jim and Lynda Panaretos (daughter, Alexandra, is in the class of 2015) are taking the helm to lead this effort as the new chairs of the Parent Campaign Committee (PCC).

Currently serving as the Vice President of Automotive Partnerships at Sirius XM, Jim lives with his wife, Lynda, in Birmingham, Michigan. Jim and Lynda have been married for 28 years and split time between Michigan and Charleston, South Carolina. Despite 12 geographic career moves, the Panaretos have remained connected to the community service and philanthropic opportunities in every town where they have lived. And thanks to their daughter’s experience, the Panaretos have joined the ranks of the many alumni and parents who add Furman to the list of places they will always call home.

Five Questions for your PCC Chairs:

Q: How did your daughter decide to come to Furman from Michigan?
A:Alexandra wanted to attend a small, liberal arts school balanced in its approaches to education. We sought a school that valued holistic learning, taught students to serve and lead in our global community, showed them how to thrive in their career and in life, and that offered top notch study away programs. Furman offered it all and had a campus that felt at home and comfortable.

Q:Why are you involved as a volunteer parent leader?
A: First of all, we believe in the mission of Furman — it’s worth it and deserves our support. The cost of tuition does not cover the total cost of providing the excellent educational experiences for our students; therefore, we must do our part to support the advancement of the University.

Q: What are some of the area of interest that are supported by parent giving?
A: Parents give to a wide range of interests such as the parents fund, which supports the annual budget, athletics, and engaged learning — including internships, study away, research, endowed scholarships, and capital projects. In fact, the newly constructed Trone Student Center was made possible because of large gifts by alumnus David Trone and his wife, June, and alumni Robert and Margaret Hill. These gifts were made while each family had a student at Furman.

Q: What is the mission of the Parent Campaign Committee?
A: The PCC’s mission is to help build connections between Furman and the parent community, as well as to support the university with a personal campaign commitment. The committee also assists in campaign marketing strategies and other development communication plans.

Q: How are Furman senior parents involved with the senior class giving project, Furman United?
A: The Furman United fund is a scholarship fund that was created in 2008 in response to Furman families who encountered economic hardship and supports them in continuing and completing their Furman education. The unified support of Furman United is evidenced by the Class of 2013’s selection of the fund as their senior class gift project. Many seniors  know a student who has benefited from Furman United so it is a very personal commitment for this class. Parents of members of the Class of 2013 are encouraged to contribute to this fund in honor of their student.