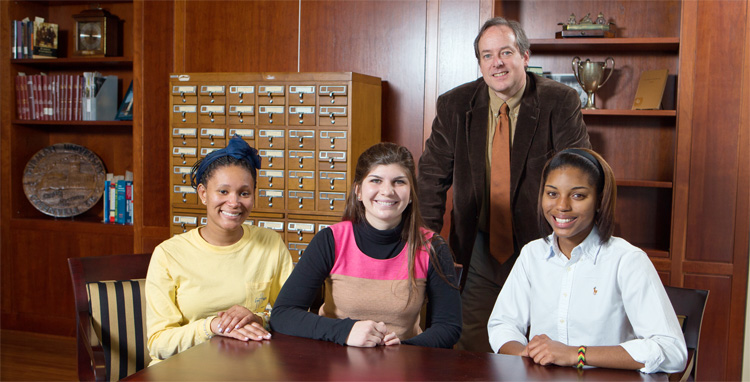 When Reagan Thompson and Lena Pringle were sitting in their high school geometry class in Lancaster, S.C., they had no idea just how important education was to their teacher, Melina Oueini. But when the Furman sophomores returned to their high school to interview Oueini for a research project, they saw a new side to her.

Oueini told her former students that her family moved from Greece to the United States because her educational opportunities were limited in her home country. If she didn’t score well on a placement exam, her educational and career path would be stifled before it ever began.

“I didn’t know a family would pick up their life and move to America for educational freedom,” Pringle said. “I’ve always had the ability to do study what I wanted, where I wanted. It was shocking to hear there were places where that’s not true.”

Thompson and Pringle, along with Sara Morano ’13 (New Canaan, Conn.), are collecting stories like Oueini’s for Freedom Stories, a research project started by history professor Lloyd Benson to commemorate the 150th anniversary of the Emancipation Proclamation. The stories will complement an ongoing lecture series that has been led by some of the nation’s leading scholars at the Upcountry History Museum, which is operated by Furman and dedicated to preserving the history of the 15 counties that make up Upstate South Carolina.

The plan is to showcase the stories in an interactive kiosk at the museum. Covering everything from abolition to the civil rights movement in South Carolina, the stories have been collected as video and audio recordings with images, artifacts and an online timeline. The students hope to have 50 to 70 stories by this summer.

“We want to connect the textbook stories about history we hear to personal stories,” Benson said. “The personal stories might not line up with the timeline facts and that’s an interesting perspective of history. What we remember and what we forget are both important.”

The idea emerged when Benson heard the students were seeking a research project. He suggested that the students collect stories in conjunction with the lecture series, but he left the project’s framework up to the students.

That challenged the students to think like research historians.

“We started with nothing, and it was up to us to come up with what we wanted to focus on, what we wanted people to tell us, how to get people interested, how they would send us their stories, and what the exhibit in the Upcountry History Museum should look like,” Pringle said. “It was overwhelming at first.”

To generate leads, the group created a website where anyone in the community could submit their story. The students thought such stories would focus on civil rights issues, considering Furman’s lecture series was centered on the anniversary of the Emancipation Proclamation. However, they quickly discovered through their site and interviews that people have a broad definition of freedom.

The process is ongoing. Every time the team encounters a problem, they re-evaluate their efforts to find a solution. Thompson learned this when she interviewed her grandfather about the family’s logging business. He felt comfortable telling her the story, but when she pulled out her video camera, he suddenly became shy. It became a common theme when interviewing the older generation.

“Part of their discovery process was figuring out good ways to explain to people that you don’t have to be Martin Luther King Jr. to have a story that matters,” Benson said. “It was very interesting to see them do that.”

The group hopes their excitement about the stories will spread to the community and open some eyes. It has already had a profound impact on the students.

“I don’t like history classes where you have to memorize dates,” Thompson said. “But (with these stories), I can relate to them because they’re in my hometown or in Greenville. It opens your eyes.”