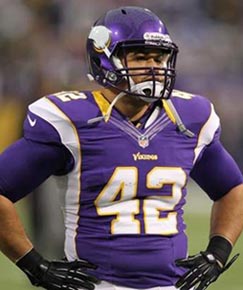 Former Furman football star Jerome Felton has traveled a long and winding road in the National Football League. But after he signed with the Minnesota Vikings in 2012 as a fullback and helped clear the way for Adrian Peterson to rush for more than 2,000 yards, he found a place that utilized his talent.  His season was so successful, in fact, that Felton was selected to play in this year’s Pro Bowl.  The Greenville News caught up with Felton after the season was over.