Building a tradition one dart at a time 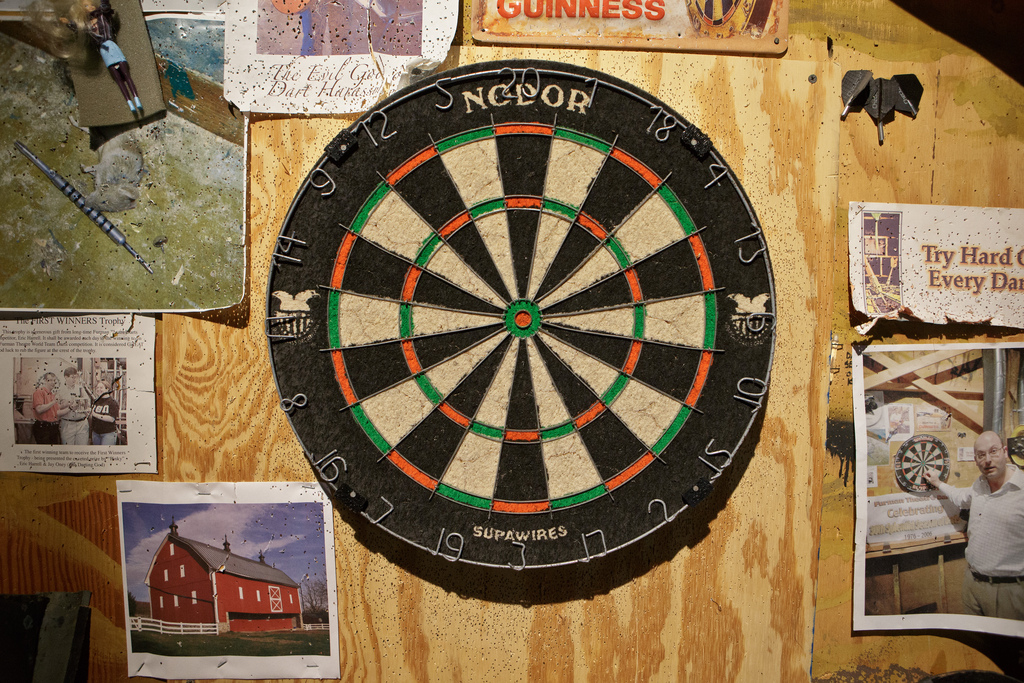 Fountain hopping. The bell tower kiss. Getting thrown in the lake on your birthday. Most students are familiar with the list of Furman traditions. But if you ask students in the theatre arts department, you”ll hear something different.

“I can’t wait to go play theatre darts,” said Kailie Melchior ’16. “It’s what gets me through the week.”

The tradition started in 1975, when Jay Oney ’78 was a student working on “The Last Meeting of the Knights of the White Magnolia.” The set included a dartboard in an old saloon and the students would throw darts to make the board look used. When the play was complete, no one was ready to retire the dartboard. Students and faculty continued to play, and eventually, theatre darts was born.

The game went in and out of vogue after Oney graduated, but it became a departmental staple when he returned as a faculty member in 1996. Now the faculty members can be found in scene shop every morning, sipping espresso and playing darts with their students.

“Every now and then the game gets huge with 14 people and those tend to become chaotic,” Oney said. “But it’s typically a lot smaller than that.”

The group plays the game golf, where the goal is to get the lowest score on each of the 18 “holes.” But there’s some Furman flair thrown in: If you throw out of turn, you get a rookie mark next to your name. If the dart bounces back to you, you get to throw again. If you don’t get a red score during the game, you get a butt kicking. Literally.

There are even ways to score zero points, which isn’t possible in a standard game. You get nothing if a dart hits the Barbie nailed next to the dartboard or if you hit a bullseye.

“Christine Aeschliman Forrester ’00 came back with her husband for homecoming,” said theatre arts professor Rhett Bryson. “She wasn’t a particularly good dart thrower and she went 17 holes with no red score. We were all primed for the kicking. On the last dart on the last hole, she threw a bullseye. There was so much screaming and yelling we had to close both doors between stage and shop because we were so loud.”

For the department, darts is much more than a game. It’s a chance for faculty and students to get to know each other, build trust, and 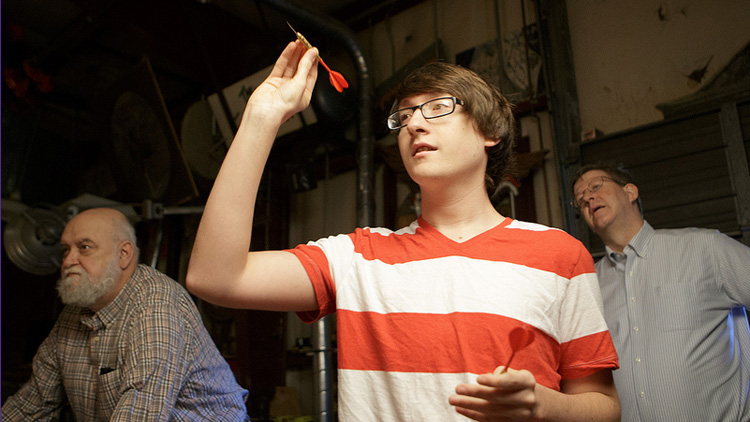 “There are a number of things about our department that have a family atmosphere and the dart game is certainly one of them,” Oney said.

That has been true for Melchior. She found out about the darts game when she showed up early for class with plans to study. She was recruited into the game and has been playing ever since.

“When I first started school, it was hard because I missed my family,” said the Tuscaloosa, Ala. native. “But after fall break, I got introduced to the darts game and it made me feel closer to the department. I haven’t felt homesick since then.”

The dart game has helped Melchior get to know the department’s upperclassmen and to see her professors in a new light.

“In most of my interactions with Jay and Rhett, they’ve been an authority figure, but when you play darts you’re all on the same level,” Melchior said.

From popping gum right before a throw, to calling someone a rookie, or teasing them about missed throws, the department has come up with countless ways to hassle people and it’s become a big part of the game. It has a larger theatrical purpose, too.

“Trying to throw people off their game helps them learn how to focus,” Bryson said. “In the theatre, you have to shut out environmental and social distractions and focus on the play.”

The playful taunts and teasing don’t damage relationships. If anything, they build them.

“Ensemble building is something that’s incredibly helpful in productions,” said Tyler Mitchell ’13 (Spartanburg, S.C.). “It’s important to be able to trust the people you’re working with and this is a camaraderie-building game.”

The spirit of camaraderie permeates everything in the playhouse. From the mementos from every play hanging on the walls, to the easy banter between faculty and students, to the stories that get passed down from class to class, it’s easy to see why students and faculty seem at home in the playhouse.

“Students come back with their families and they point to these things and say, ‘I was a part of this,'” Bryson said. “It creates a sense of belonging.”