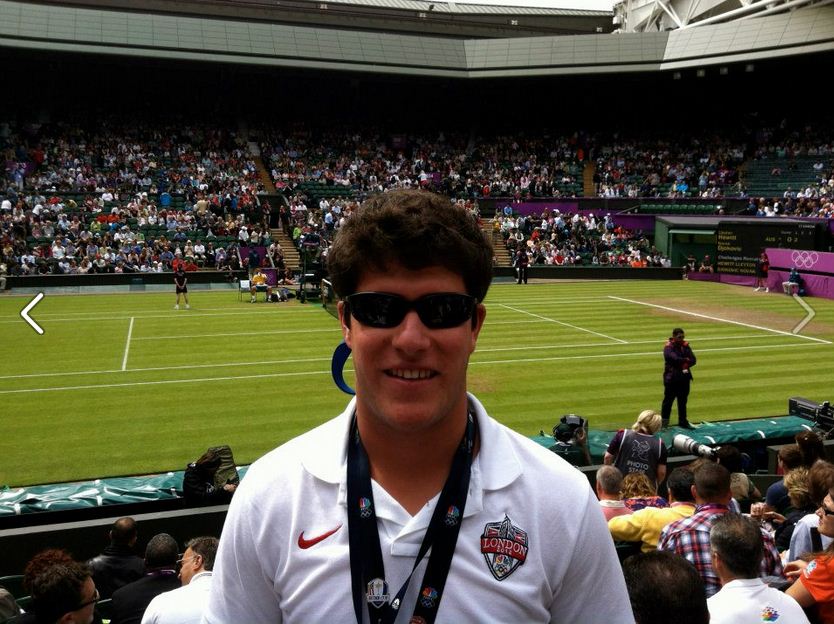 When many college students think of summer, images of sunshine and a slower pace come to mind.

But many Furman students are a different breed. They use the downtime to explore internships, travel, conduct research and expand their horizons.

This summer, Reid Morelli ’14, took that notion to the extreme when he boarded a plane on a journey to the Olympics as an official member of the NBC Universal Guide Program. Currently studying abroad in Brussels, Belgium, Morelli took an hour to share his summer experience with us.

The road to London began a few years ago, when an interaction with a family friend developed into a recommendation and entre to the yearlong application process that selects just 20 Americans to participate. As guides, these individuals are responsible for catering to every need of NBC Universal’s 1600 guests – including celebrities, diplomats, advertisers, and of course, athletes.  His daily duties included anything from tours of London (filled with knowledge acquired during his 10 days of intensive training), escorts to and from the airport, and “being responsible for knowing everything about everything relating to the Olympics,” he said.

The perks? Morelli was able to attend 15 different Olympic events, opening and closing ceremonies, and play host to a bevy of superstars known to him previously only on the television screen or within a national sporting arena.

As a former member of the men’s tennis team at Furman, Morelli was most excited to attend the matches at Wimbledon. “It was surreal, being on the fifth row with my heroes playing on the Wimbledon court,” he said.

Each day of the Olympic Games was a whirlwind for Morelli – sometimes beginning with a 4:00 am wakeup call and ending with final duties that stretched to 3:00 am the following morning. “NBC looks for people who are willing to work really hard, but the perks you receive, along with free food and lodging make it worth it,” he added.

Morelli’s Facebook page is littered with photos posing with one Olympic champion after the next, and a token beaming grin on his face, of course.  He says his trip was surreal but also an adventure that he will always remember.

Morelli knows that the connections and experiences will undoubtedly lead to future opportunities and suggests to his fellow students, “Don’t be afraid to take a risk or to try out for something that seems out of reach. Drop everything you are doing and go for it. You never know how it will shape your future.”