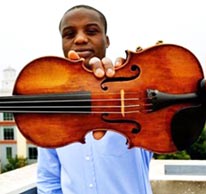 Seth Gilliard, who graduated from Furman in May with a degree in music, definitely knows how to pull some strings, or rather, play them.  According to ABC News, the Charleston, S.C., violinist is taking the music scene by storm with his classical renditions of mainstream pop songs.  Gilliard’s YouTube page currently has 18 covers he’s performed and professionally recorded by artists such as Justin Bieber, Usher and Alicia Keys.