Spending the summer looking at animal feces and struggling to find phone reception isn’t most people’s idea of a good time. But throw in the chance to track mountain lions in the wild and you have a summer Jesse Woods has been thinking about ever since she arrived at Furman.

“I remember hearing about this project on a scholarship interview before I even decided to go to Furman,” said Woods ’14. “That was one of the reasons why I wanted to come here.”

For three months, the Pickens, S.C. native and other aspiring field biologists researched new ways to track mountain lion populations in New Mexico. The project, led by Furman biology professor Travis Perry, provided students with a rare hands-on opportunity to get up close and personal with one of the largest cats in the animal kingdom. 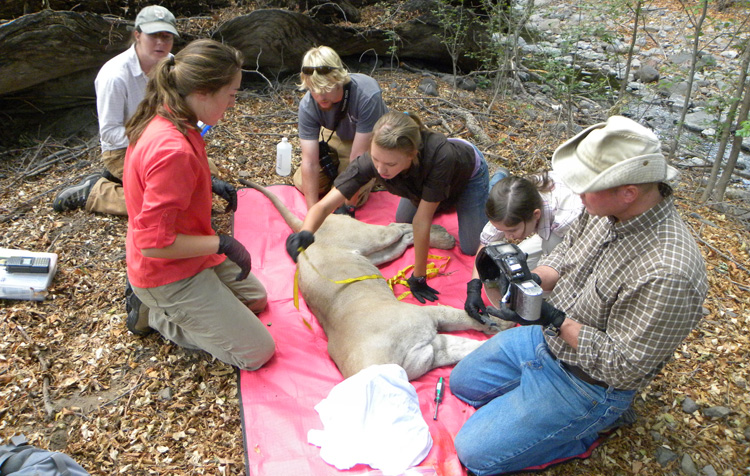 of a population in a given area.

Currently, mountain lion populations are tracked by capturing individual animals and either tagging them or fitting them with a GPS collar, a method that is both time and labor intensive.

“To put a GPS collar one mountain lion costs about $15,000,” Perry said. “For that amount of money, you could cover a large area with a remote camera grid and we hope in the future to get the whole population estimate for a large area.”

In addition to downloading and cataloging the photos once a month, students hiked to randomly generated GPS coordinates to record the types of animal feces in the area. This gave them an idea of the mountain lion’s prey in the area.

And on three occasions the students got the opportunity to take the weight and measurements of a sedated mountain lion.

The interactions with the animals made a lasting impression.

“”We got to watch the sedated mountain lions wake up from a safe distance,” said Woods ’14. “They’re more scared of us than we are of them, so they just run the other direction. It’s cool to get to see them up close because they’re really cryptic animals.”

It isn’t just the mountain lions’ aloof nature that makes getting hands-on experience with them unusual. There are few opportunities to do this type of research, especially at the undergraduate level.

“That’s why I have so many students,” Perry said. “The opportunity to work with a large charismatic carnivore is such a rare thing even at the professional level. I want to involve as many students as possible.”

Some even tend to stick around after graduation.

Like many of the students on the trip, Richard Pickens ’12 got his start in the program through Wild Semester, Perry’s study away program in New Mexico and South Africa that focuses on conservation biology. Though he graduated in May, he couldn’t resist making one more trip.

“This is definitely the most important hands-on experience I’ve had in my career field,” Pickens said. “This is an opportunity you can’t teach in the classroom. It gives you a window into what it is to be a professional biologist that you can’t get anywhere else.”