Nick Rossano, a graduate of Riverside High School and two-year captain of the Greer Spartans, has been named the first recipient of the Furman Rugby Fund scholarship.  He has enrolled at the university as a member of the class of 2016.

A strong-side flanker, Rossano is a two-time South Carolina All-star. In May, he was named Most Valuable Player of a Georgia U-19 all-star squad that finished 3-1 in a national all-star tournament held in Pittsburgh.

Rossano led the Spartans to a 26-8 record over the past two years.  Furman Rugby Coach John Roberts also coaches the Spartans and has watched Rossano develop since he was a rising sophomore. 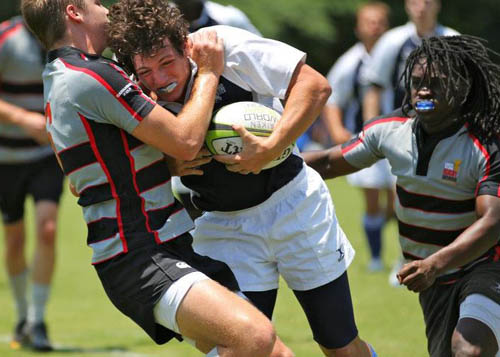 “Nick has the engine of a strong-side flanker,” says Roberts. “He is seemingly everywhere at once.  He is the best high school flanker I have seen.  That aside, he is a young man of tremendous character who will be a perfect match for our squad.”

Rossano is an Eagle Scout, graduated with a 4.45 GPA, and is active in his church and community.  He is son of Sal and Judy Rossano of Greer.

In addition to rugby, Rossano participated in track and football at Riverside.

Scholarships funded through the Furman Rugby Fund are solely dependent on donations from rugby alumni, parents and friends. The university and the rugby team launched the fund this summer.  The initiative will eventually provide significant tuition assistance to 20 rugby student athletes.

“This scholarship made the difference between attending Furman and needing, financially, to attend another school,” said Rossano.  “I can’t thank the alumni who contribute to this fund enough for the opportunity to attend Furman.”