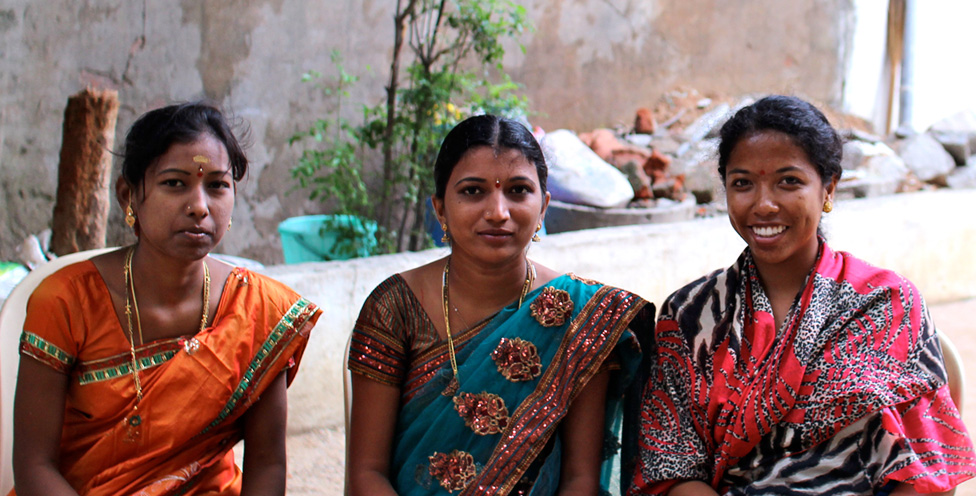 Rabarison (right) sits with two of her colleagues.

It’s not everyday a movie night turns into a career networking event. But for Lauren Moon, it did just that.

When she was a senior, Moon thought a Bollywood night sounded like a fun event for the Furman University Student Activities Board (FUSAB). She pitched her idea to the group, and then, after it was approved by the board, she shared her vision for the movie night at a trustees dinner. To her surprise, the wife of a trustee shared her passion for Indian culture–and offered to put Moon in touch with Mary-Mitchell Campbell ‘96.

Turns out, Campbell is the founder and executive director of Artists Striving to End Poverty, a non-profit organization that teaches the arts to underprivileged children across the globe.

“Knowing how busy Mary-Mitchell was, I couldn’t believe she responded to my email,” Moon ‘07 said. “But she did and I had a three-hour phone conversation with her. We decided that I would come up and see (her organization). Then, I would go to India and teach.”

Moon is now one of two graduates who has spent a summer in India thanks to her chance meeting. Though the list is still small, Moon is hoping it’s just the beginning of a steady stream of Furman alums making an impact in the region. She’s even using own resources and connections to help other Furman students follow her path.

For Moon, it was a life-changing experience. Campbell’s organization offered her the opportunity to improve the educational experience of underprivileged children. Through the arts, she was able to get her young pupils to think more creatively and analytically in the classroom.

That created new job opportunities for Moon after graduation. Moon landed a job as an education consultant with the IDEX Fellowship in Social Enterprise. In that position, Moon has helped teachers and administrators develop programs that will improve India’s Affordable Private Schools. Along with encouraging students to pursue a college degree, these schools provide low income families with a way to invest in their children’s education and have a voice in the educational system.

When most students arrive at college, they’re not sure where their path is going to lead. Furman’s network of supportive people helps students find their path and achieve their goals. And once a Furman student succeeds, they’re ready to turn around and help someone else reach their goals. In Moon’s case, her connection with Campbell was the beginning of a network of Furman alumni helping each other live and work in India.

Campbell not only gave Moon an opportunity to explore new paths after graduation, she also passed on her love affair for India. So when Moon got the opportunity to go back as an education consultant with the IDEX Fellowship in Social Enterprise, she was more than ready.

Moon spent the 2011-2012 school year in India helping teachers and administrators develop programs to improve India’s Affordable Private Schools and encourage students to continue on to college. Government run schools in India are typically suffer from disorganization and a lack of funding. Affordable Private Schools charge a modest fee and give low income families a way to invest in their children’s educations and have a voice in the educational system.

Moon developed an interest in working with students while she was at Furman.

“The four things I was involved with at Furman fostered that in some way,” Moon said. “I love working with people. I was on orientation staff, FUSAB, Tri-delta sorority and I worked a little with the Heller Service Corps. All of those things have shaped my desire to work with college students.”

Moon’s experience opened the door for Karolle Rabarison. Moon met Rabarison when the two worked together on FUSAB and Rabarison’s decision to accept the IDEX fellowship hinged on her relationship with Moon.

“I started seeing all these pictures of India on Lauren’s Facebook page, but I knew she’d been there before so it took me awhile to realize she was doing the IDEX program,” Rabarison ‘10 said. “When I got accepted I made my decision to actually go was because I was about to speak with Lauren about her experience.”

Like Moon, Rabarison can pinpoint specific experiences at Furman that fostered her interest in study away. She participated in the Summer China Experience and a semester study away program in China.

“I was interested in reading about development issues because I lived in Madagascar,,” Rabarison said. “But I wasn’t interested in studying it until I went to China. I never would have gone to the semester abroad if I hadn’t gone in the summer.”

Rabarison left for India this July to continue the work done by Moon and her cohorts. She also plans to help students transition to college by connecting them with mentors from local universities. These mentors can help walk the students through entrance exams and the college application process.

Moon said the mentoring relationship between the two alums is far from over.

“Karolle is a friend of mine so I definitely want to be there for her if she has any questions or frustrations,” Moon said. “The first three months are taxing, so hopefully she’ll use that connection and lean on me if she needs it because I’m more than willing.”

The desire to help other Furman students and alumni is very much a part of the school’s culture. Rabarison is already looking forward to stepping into a mentor role for other alumni.

“Maybe when I’m done, if there’s another student that wants to do it, I can talk to them,” Rabarison said.

Stories of mentors at Furman