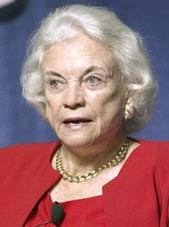 GREENVILLE, S.C.—The participants in the Carol N. Ney National Mock Trial Tournament at Furman University this weekend will get a little more legal counsel than they were expecting when retired U.S. Supreme Court Justice Sandra Day O’Connor gives some brief remarks at the opening ceremony of the tournament Friday, March 23.

The opening ceremony runs from 1:30-2:30 p.m. in McAlister Auditorium, and Justice O’Connor will offer greetings and words of encouragement to the mock trial students.  She is expected to speak for approximately 10 minutes at the ceremony.

The university community, as well as the public, is invited to attend.  Justice O’Connor is visiting Greenville this week as part of a 4th Circuit Court of Appeals panel that will hear cases Thursday and Friday in the federal courthouse.

The American Mock Trial Association selected Furman as one of eight sites across the nation to host opening rounds of the 2012 national championship tournament, which will be held in Minneapolis, Minn. in April.

Twenty-four teams representing eighteen colleges and universities will compete in the Ney National March 23-25, including Duke, Emory, Harvard, Princeton, UNC-Chapel Hill, and Washington & Lee. Round I trials begin shortly after the opening ceremony, and all trials are open to the public.

Furman trustee Jim Ney and his wife, Carol, will present this year’s tournament where students, portraying witness or attorney roles, simulate a criminal trial. Both are Furman alumni.

A total of 192 teams nationwide will compete in opening rounds for one of 48 bids to the championship finals. Furman will field two teams in the Ney National for a chance to win its 16th consecutive berth in the finals.

O’Connor became the first woman to serve as a justice on the United States Supreme Court in 1981.  She served for 24 years before retiring from the court on Jan. 31, 2006.  In 2009, she received the Presidential Medal of Freedom from President Obama.

For more information about the event, contact Glen Halva-Neubauer, director of Furman’s mock trial program, at 864-294-3608, or glen.halva-neubauer@furman.edu. Additional information can also be found at http://www.furmanmocktrial.org/.