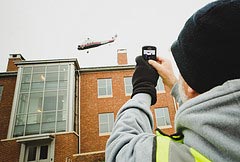 The helicopter loaded equipment into the roof of the Townes Center.

Furman University installed new energy-saving equipment into the roof of the Charles H. Townes Science Center on Tuesday morning, and it was a big enough job that a helicopter had do most of the heavy lifting.

A total of 16 helicopter lifts took place over a two-hour period, with the helicopter flying from an area near Timmons Arena to the roof of the Townes Center.

To reduce energy consumption, Furman is installing four additional energy wheels to act as a heat exchanger between the fresh air entering the building and the exhaust air leaving it.  The new equipment is expected to save Furman approximately $60,000 per year in heating and cooling costs, and substantially reduce its carbon footprint.

Adding energy-saving equipment to the Townes Center is part of Furman’s ongoing commitment to sustainability.  In addition to being a charter signatory to the American College and University Presidents Climate Commitment, the university has been named a Campus Sustainability Leader by the Association for the Advancement of Sustainability in Higher Education and a Climate Action Leader by Clean Air-Cool Planet.

During the past decade, Furman has completed a sustainability master plan, founded the David E. Shi Center for Sustainability, built the first LEED-certified building in South Carolina and created an undergraduate major in Sustainability Science.