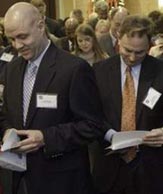 Furman University is among the agencies who received grants this week from the Hollingsworth Funds, the foundation that controls the estate of the late Greenville industrialist John D. Hollingsworth.

The Hollingsworth Funds announced it was providing a total of $4.36 million in grants to Furman, the Greenville YMCA and 70 other local benevolent agencies.  The total for 2011 was up 6.5 percent from the previous year.

Mr. Hollingsworth instructed in his will that the assets from his estate be invested, with 45 percent of the proceeds going to Furman, 45 percent to local charities and 10 percent to the Greenville YMCA.

John Beckford, Furman’s vice president for academic affairs and dean, said the university’s allotment of more than $1.9 million will be used to fund the Hollingsworth Scholars scholarship program, as well as support the university’s Economics and Business and Aaccounting departments.

The Hollingsworth Scholarship provides more than $100,000 in scholarship aid over four years to South Carolina residents.  The renewable awards are worth $25,000 per year and carry a study abroad stipend of $1,000.

Read more in The Greenville News