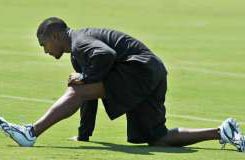 The plan was going ahead full-steam for former Paladin football player Will Middleton. He graduated from Furman in four years, then spent his fifth playing football and preparing for the MCATs and internships so he could go to medical school.  Then the NFL arrived in his life.  The Florida Times-Union reported on Middleton, who, after a few up-and-down years in the NFL, is now starting at right corner for the Jacksonville Jaguars.