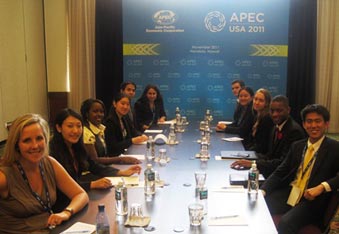 This year's APEC conference is taking place in Hawaii.

Four Furman students and two professors are currently in Hawaii for the annual Asia-Pacific Economic Cooperation conference.  As part of their duties at the conference, the students attended a meeting of the APEC Forum Finance Ministers hosted by U.S. Treasury Secretary Timothy Geithner.  The Furman students are participating in the conference through a program organized by APEC Voices of the Future.

The students in Hawaii this week, who are accompanied by Furman professors Cleve Fraser (Political Science) and Ken Peterson (Economics), are:

Read the post by U.S. Department of the Treasury