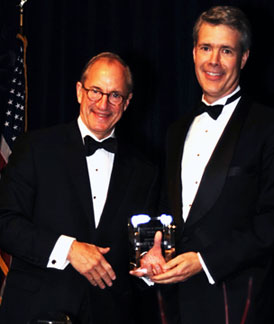 The banquet took place Oct. 18 at the Fairmont Hotel.

AT&T CEO Randall Stephenson was also honored at the ceremony with the American Horizon Award, which was presented by Benjamin T. Jealous, president and CEO of the NAACP.

President Smolla is nationally recognized as a scholar, teacher and writer, and is one of America’s foremost experts on issues relating to freedom of speech, academic freedom and freedom of the press.   He is the author of numerous books, including Free Speech in an Open Society, Jerry Falwell v. Larry Flynt: The First Amendment on Trial and Deliberate Intent.  His latest book, The Constitution Goes to College: Five Constitutional Ideas That Have Shaped the American University, was published in 2011 by New York University Press.

The Freedom of Speech Award recognizes an individual who has made important contributions to the advancement and protection of free speech.  McDowell has served on the Federal Communications Commission since 2006.  He has fostered free speech by helping consumers expand their communications choices, and by vigorously opposing regulatory policies that would amount to government censorship of media content.

The Media Institute is a nonprofit research foundation specializing in communications policy and the First Amendment.  For more information, visit the Institute online.